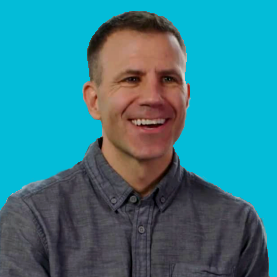 We sat down with with Andrew Kisslo, Chief of Staff at Microsoft Azure Marketing to talk about how OKRs have transformed their business. Andrew talks about at-scale alignment in 100 days, slashing the prep time for monthly Ops reviews and the power of lateral alignment.

Deidre Paknad, WorkBoard CEO: Andrew, welcome and thank you for joining us! Let’s start with what drew you to OKRs and WorkBoard?

Andrew Kisslo, Chief of Staff at Microsoft Azure Marketing: One of the reasons why we pursued OKRs was because the cloud business at Microsoft Azure is measured in billions — and it’s growing 76% year on year — and they don’t teach you in business school how to operationally support that kind of business. So OKRs help us to drive alignment and transparency in a very agile way.

Previously we were in a waterfall cascade mindset, typically with yearly reviews of the priorities. But you need 30, 60, 90 day sprints in order to keep up in this business. So OKRs became a much more agile scrum-based way to think about driving strategic priorities for the business.

We elected to launch OKRs across the organization all at once rather than using a phased approach, either starting with the executives in a secret process and then going down, or the inverse: a skunk works project from individual contributors who are fighting for relevance upwards. So we launched all at once by design to bring everybody along in the journey.

OKRs help us to drive alignment and transparency in a very agile way.

Why do you think the process and the platform are important for chiefs of staff in particular?

Andrew: Chiefs of staff are very interesting roles because you have to look at the business in a wide aperture of everything from people, process, budget, strategy output, and being able to look at a platform and even OKRs to be able to represent for the executive how the business is frankly going is just fundamental to the role of the chief of staff.

What impact and change have you seen in the organization because of adopting OKRs, and what shifted?

Andrew: The number one thing I’ve seen is teams becoming aware of what their sister teams are doing. Executives have a great view from a top-down perspective. But OKRs have driven a massive amount of transparency between teams that are actually striving towards the same goals — people are actually saying to each other, “Oh, I didn’t know you were driving that. I thought I was driving that.” Being able to rally all of our resources into one common direction has been great.

Part of the OKR methodology is the shift in mindsets from outputs to outcomes. Can you tell us about that shift for your group and what you think it’s unlocked?

Andrew: One thing that has come out of the shift to OKRs has been the concept of “embrace the red.” We’ve really tried to get out of a mindset of “here’s the activity I’m driving for,” which is what people can feel in the initial stages of doing OKRs. We’ve tried to shift more towards an empowerment mindset. What if you’re able to say, “I’m red because I know the blockers that I’m facing,” and you can actually have executives work on your behalf. You can raise your hand and say, “I need help in this area in order to get to green.” That’s where you get massive alignment across a leadership team — they can say, “If this is still important, I need your collective help to unblock me to get out of the red.” That alignment, that transparency has been one of the greatest benefits.

We are all on the same page with the same data. The alignment and transparency have been great benefits.

Andrew: There’s two things as a chief of staff that I love. One, is the business review. Given that we do a running business review, just having that single pane of glass and the ability to see how the business is doing is phenomenal just as a dashboard. The other feature, which I’m actually partial to, is the Teams integration. Just the ability to actually in a very collaborative way interact with the bot and actually sometimes drop the bot into a conversation with people and not have to worry about spinning up the tool for some heavyweight use case has been great for us.

When we ran our business reviews in the past, what we did was we had a four hour meeting where we actually looked at left and right of draining the business. And the work back required to do that looked like a three week build up of building slides that oftentimes the deck was 40, 50, 60 slides. And because we were assembling all of this content over a three week period, what we found was actually every slide we went to had different time periods of data so the freshness of the data that you were looking at was always different.

By going to WorkBoard and having a tool and then basically bringing up browser, the amount of work now that is flowing into the tool and just saved by looking at WorkBoard it’s been massive. Everyone’s looking at the same data up and down, left to right. And then the timeliness of the data; we’re all on the same page from a time period perspective, so it’s always fresh. It’s always relevant. And we know where we are at any given moment.

What’s your experience been working with WorkBoard and the team?

Andrew: I think one of the things about working with WorkBoard is not only their expertise and their ability to help us in the early stages through facilitation and coaching, but also the urgency in which when we give feedback, we need a feature. That’s one of the great things is the responsiveness of the WorkBoard team to swarm and actually be attentive and hear our needs and build ... purpose-built for us when we need those things to happen.

The number one thing I would say is in the past, every decision was typically in a vacuum compartmentalized and so the relationships between any decision were always isolated. And by having WorkBoard in a tool and being able to see this in one dashboard, you’re actually able to intuitively see the relationships between teams, between work streams and so as a result decision making is made with a wider aperture on the business rather than spot specific decisions.

Andrew, can you give us three words that describe the impact and the benefits of WorkBoard and OKRs?

Andrew: I would say energy, impact and alignment.

Energy; the ability for the team to rally and have a common flag that they’re all driving towards. Impact is the ability for people to articulate where their work is actually the contribution is being made. Alignment; just that ability to see not only up and down between the leadership layers but between teams has been great.

About Andrew Kisslo
Andrew is an accomplished marketing professional with recognized success in creating and driving strategic results driven initiatives. Resourceful and resilient leader with a bias for action, adept at navigating cross cultural and organizational boundaries to land results. He is currently attracting, developing and exporting a diverse team of high performers, developing the next generation of talent at Microsoft.

About Deidre Paknad
Deidre Paknad is CEO and co-founder of WorkBoard. She’s led several high growth organizations as a founder and as an executive at IBM. She’s seen first hand how high results alignment, accountability and transparency unlock smart growth at companies large and small — and how their absence causes growth drag and enormous disadvantage.

Deidre has over a dozen patents and the Smithsonian Institution has twice recognized her for innovation. Goldman Sachs named her one of the 100 most intriguing entrepreneurs of 2019.